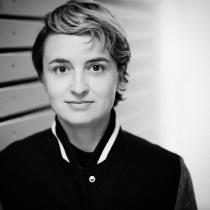 Katharina Adler was born in Munich, where she now lives again after stations in Leipzig and Berlin. She studied American Literary History at the Ludwig-Maximilians-University Munich and at the German Literature Institute Leipzig. After her studies, she co-founded Adler & Söhne Literaturproduktion and was editor-in-chief of the English-language internet portal munichfound.com.

In the summer of 2018 Katharina Adler published the novel Ida (Rowohlt), nominations for the Klaus-Michael Kühne-Prize and the aspekte Literaturpreis followed. In 2019 she was awarded the Bavarian Art Promotion Prize.

After a radio play adaptation by Ida for NDR, Katharina Adler is currently working on her second novel, as well as on a screenplay for a feature-length film. She also writes reviews and essays for the Süddeutsche Zeitung.