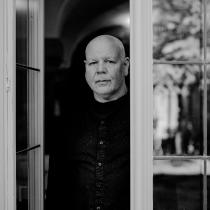 Dieter Froelich, born in 1959, studied at the Städelschule in Frankfurt am Main in the 1980s.  As a master student of the sculptor Michael Croissant, he also attended the now legendary cooking seminars of Peter Kubelka, who was the first to establish the discipline of “Cooking as an art genre” at a German university. Froelich’s concept of plastic is correspondingly broad. "Dieter Froelich’s oeuvre captivates with works that depict cultural-historical horizons and political contexts of past and present times. With his objects, texts, and cooking as art in the context of his “Restauration a.a.O” he fills in manifold ways the range between spirituality and political codices.«   (Kathleen Rahn)