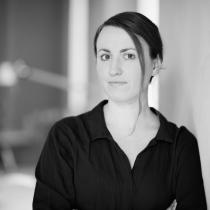 Paula Fürstenberg, born 1987, grew up in Potsdam. After a two-year stay in France, she studied at the Swiss Literature Institute in Biel from 2008 to 2011. Since then she has lived and written in Berlin. She has been awarded the Hattinger Prize for Young Literature, and the working scholarship of the State of Brandenburg and the Berlin Senate; in 2014 she was a fellow of the authors' workshop at the Literary Colloquium Berlin. She is a board member of the network Free Literary Scene Berlin, a member of the Kunsthaus Strodehne e.V., and the Berlin coordinator of the action group "Literature for what's happening". Her debut novel Familie der geflügelten Tiger (Family of Winged Tigers) was published in 2016 by Kiepenheuer & Witsch. In 2019, she will be writing a collaborative 'schoolhouse novel' with a class of 8th graders from Brandenburg, and working on her second novel at the International House of Artists Villa Concordia in Bamberg.