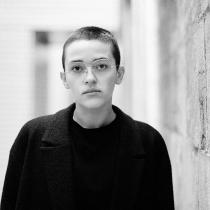 Enis Maci, born 1993 in Gelsenkirchen, studied literary writing at the German Literature Institute Leipzig and cultural sociology at the London School of Economics. In 2010 she was awarded the Ruhr Literature Prize. The play Lebendfallen (Live Traps) was written as part of of the writing workshop "Flucht, die mich bedingt" (Escape that defines me) at the Maxim Gorki Theater Berlin. Her play Mitwisser (Accomplices) was awarded the Hans Gratzer Scholarship in 2017 and premiered at the Schauspielhaus Vienna in 2018: For Mitwisser, she was also voted Young Author of the Year 2018 by Theater heute. In the same year, Suhrkamp published a book of her essays under the title Eiscafé Europa. For the 2018/19 season, Maci is the house author at the Nationaltheater Mannheim.