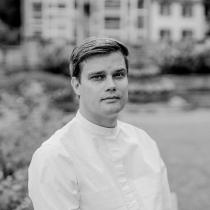 Sauli Zinovjev is a Finnish composer born in 1988. After finishing his studies at the Sibelius-Academy and HfM-Karlsruhe under guidance of Tapio Nevanlinna and Wolfgang Rihm, Zinovjev has been working as a freelance composer and his output has been mostly focused on orchestral music. Zinovjev's works have been performed and commissioned for example by such orchestras as the Bamberger Symphoniker, Oslo Filharmonia, Gothenburg Symphony, Orchestre de Chambre de Lausanne and Finnish and Swedish Radio Symphony Orchestras in collaboration with conductors and soloists such as Klaus Mäkelä, Andre de Ridder, Sakari Oramo, Vikingur Olafsson and Pekka Kuusisto.