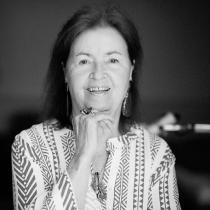 Born 1939 in Bergneustadt/NRW. After school and training, work as a magazine editor, etc. at the magazines BRIGITTE, ELTERN, FREUNDIN, MÄDCHEN and later as a freelance journalist mainly for the SÜDDEUTSCHE ZEITUNG MÜNCHEN with a focus on literary portraits (Thomas Bernhard, Wolfgang Koeppen, Brigitte Kronauer and many others). The literary development began with the writing of short stories and narratives. One of them, ANGST VOR DER ANGST, was filmed by Rainer Werner Fassbinder in 1974 for WDR. This led to the first novel, LANGSAME TAGE: since 1986 working as a freelance writer and screenwriter.