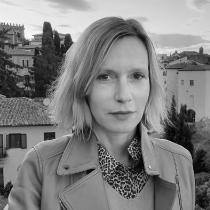 Géraldine Schwarz (born 1974) is a German-French writer, journalist and documentary filmmaker. After working for a long time as Germany correspondent for the news agency AFP, she now publishes in various international media and participates in socio-political debates on democracy, Europe and populism.

For her book Die Gedächtnislosen  (Les Amnésiques, Flammarion), translated into twelve languages, she received the European Book Prize in 2018 and the Winfried Prize for International Understanding in 2019. Through three generations of her family, the author traces the painful reappraisal of the past in Germany, which she sees as a cornerstone of democracy, and compares it with the work of remembrance in France. She describes herself as “a child of Europe” and advocates a rethinking of remembrance.

Géraldine Schwarz has been a fellow of our artist residency in the first half of the fellowship 2022/23.