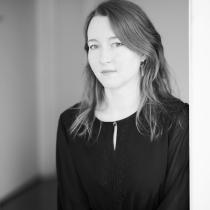 Lisa Streich, born 1985 in Norra Råda, Sweden, has studied composition and organ in Berlin, Stockholm, Salzburg, Paris, and Cologne with Johannes Schöllhorn, Adriana Hölszky, Mauro Lanza, and Margareta Hürholz. Advanced courses with, among others, Chaya Czernowin, Steven Takasugi, and Beat Furrer have rounded off her musical education. Her music has been performed in Europe, Israel, Japan, Canada, and the USA by renowned orchestras and ensembles, including at the MATA Festival New York, Ultraschall Berlin, Tzlil Meudcan Tel Aviv, Ircam Paris, Wien Modern and in Cologne Cathedral. In 2014 she was awarded the Bernd Alois Zimmermann Prize and a working fellowship by the Swedish Arts Fund, followed by numerous awards and composition commissions for renowned European festivals and ensembles. In 2016 she received a grant from the Villa Massimo in Rome and in 2017 was awarded the composer's prize by the Ernst von Siemens Foundation. One CD portraying her work was released in April 2018 by the label WERGO; another will follow in 2019 on KAIROS, Vienna.