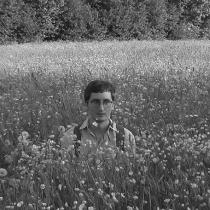 Andreas Chwatal, born in Regensburg in 1982, works primarily with the medium of drawing. After studying art history in Regensburg for two years, he moved to the Art Academy in Munich in 2006, where he studied with Markus Oehlen. Important exhibitions included the participation in 2016 in the group exhibition "Favoriten III – Neue Kunst aus München" at the Lenbachhaus, 2017 “Startupart” at the MunichRe in Munich and 2018 “Limbo Lichtspiele” at the Museum Villa Stuck. Since 2011, Andreas Chwatal has been presenting solo exhibitions at the galleries Andreas Grimm and Jo van de Loo in Munich.