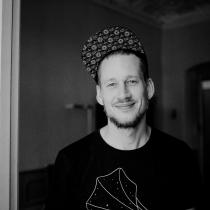 Benedikt Feiten was born in Berlin and lives in Munich, where he drinks a lot of black tea and does a lot of things, sometimes even without fussing. He was awarded the Literature Scholarship of the City of Munich and was a participant of the Bavarian Academy of Writing. His debut novel “Hubsi Dax” (Voland & Quist) was published in 2016. In 2019 he received the Bavarian Art Promotion Award for “So oder so ist das Leben.” After studying American Literature, he wrote his doctoral thesis on music and transnationality in Jim Jarmusch’s films and taught at Ludwig-Maximilians-Universität. He is trumpeter and cellist in various bands and projects. He is currently working on his third novel, “Leiden Centraal”, which will be published in spring 2022.